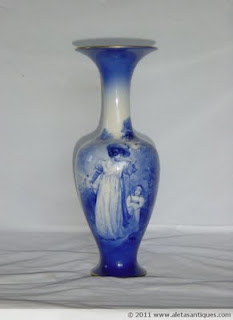 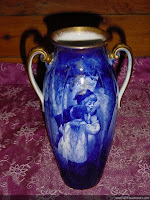 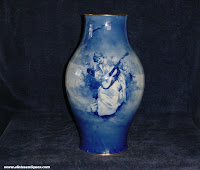 Blue children is among the most collectable of the Royal Doulton Series Ware.  Documentation on the line is scarce, and no one seems to know quite what makes it so popular, perhaps it is the calming effect of the distinctive flow blue palette, or the emotive nature of the subjects, wistful children (and occasionally adults) in situations that seem to evoke the innocence and gentility of a bygone era.  One forgets, when gazing at the paintings, that the Victorian and Edwardian ages were actually harsh times for many marginalised British children. 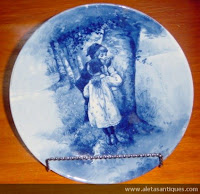 The series has been continually popular since it debuted in the 1890s. According to recognised Doulton expert Louise Irvine, it had been discontinued by 1930, so the limited production run would help to account for its limited availability ergo its collectability, scarcity being one of the criteria which increase a collectable’s value. There were 24 known Blue Children scenes, though in an online article c. 2008, antiques aficionado Christopher Prudlove mentions that a collector of his acquaintance believed he had discovered another.[i] To our knowledge this has not been confirmed.
The pictures depict children, women with children, and in three cases women alone: ‘Woman Playing a Guitar, ‘Woman with Muff in Snowstorm’, and ‘Woman by Seashore’.

The Market
Like many collectables, Royal Doulton’s Blue Children have been somewhat affected by the economic downturn which began in 2007, and people who bought in an inflated market may have some cause for worry.  Good pieces are holding their value. For example, a 13 inch plate sold for £130 at auction in 2005, comparable items are fetching similar prices on eBay in 2011[ii].  At Tuckerbox Auctions in Binalong, NSW Australia in 2010, a 9 inch Blue Children plate sold for AUD300[iii].  In general, retail prices are increasing modestly; prices for rarer items can run into the thousands. 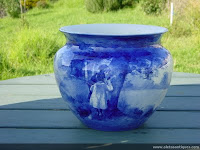 To date there have been no Blue Children reissues, so one will not see bona fide new Blue Children pieces produced in Indonesia or Asia.  According to the Antique Trader Guide, fakes began appearing early in 2003. Blue Children should exhibit some age related wear; the gilding should not look as if it were done yesterday, and quite a lot of the earlier pieces will exhibit crazing.  The paintings are transfer printed, with hand painted touch ups and/or embellished  hand painted backgrounds and details, and that is why in general they were not signed by the artist, nor were the artist’s or decorator’s monograms engraved on the base like other Royal Doulton pieces of the same period with multiple monograms to the base. Having said that, artists who touched up the transfer prints on the earlier pieces sometimes signed their work. One can find a few examples signed by the artist who did the hand painting, made through about 1902.  Recorded signatures are J. Boulton, M. Brown, P. Curnock, C. Jackson, F. Jones, Kelsall, A. E, Simpson and “Yomans” (sic).[iv]

Now after reading this wonderful article.I have bookmarked it.

Thank you for visiting my blog, and thank you even more for the kind comment.

I hope you will continue to find information of value here, and I'll work hard to make it so! Cheers!